When my husband Derek bought me a pair of long underwear, I knew it meant one of two things. Either the thrill was gone from our marriage, or he wanted me to do something I probably didn’t want to do.

The fact that the long johns were black and trimmed with lace offered a glimmer of a hope. Then Derek told me what he had in mind. 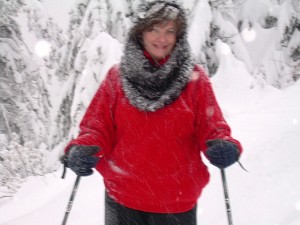 “You know honey, Mount Spokane is a very romantic place,” he began. “There’s a rustic lodge with a wood-burning fireplace that’s perfect for a picnic.”

Derek is an avid cross-country skier. No downhill racing with those sissy ski lifts for him. He skis the way his Nordic ancestors have for centuries, climbing steep slopes, then gliding downward on skinny, well-waxed skis.

Every weekend he hits the trails at Mount Spokane. Our sons or his sister and her Norwegian husband usually accompany him.

My spouse is an extroverted, gregarious sort of guy, and if he loves something, he wants everybody to love it – especially me. However, he knows I’m not an outdoors person. I prefer to view snow from the comfort of my sofa with a mug of cocoa in hand.

So he made me an offer I couldn’t refuse.

“I bought cheese,” he said, and wiggled his eyebrows seductively. “Smoked black-pepper white cheddar cheese,” he continued. “And I’ve got salami and gourmet crackers. I’ll make a big thermos of your special fireside coffee. Would you please try cross-country skiing – just once?”

It’s so unfair. I’m a sucker for any meal I don’t have to cook, and Derek is well acquainted with my passion for cheese.

I rarely tackle any project without some kind of research. This is what I found on Wikipedia: “As a sport, cross-country skiing is one of the most difficult endurance sports, as its motions use every major muscle group.”

That didn’t sound like walking to me. Looking for reassurance I asked my sister-in-law for more information. “Well, it’s pretty hard at first,” she said, “but all you really need is rhythm and balance.”

Rhythm and balance? The one time I attempted downhill skiing, I tripped on a chunk of crusty snow in the parking lot at Mount Spokane. I spent the afternoon in the lodge with an ice pack on my ankle. Does this sound like someone who’s gifted with rhythm and balance?

But it was too late to back out. Derek had already procured boots and skis for me and packed the promised picnic. I grimly donned my long underwear.

The drive up the mountain was beautiful, and as the snow softly fell, I began to feel a bit more optimistic about the whole adventure. The lodge was warm, the fireplace inviting, and the indoor plumbing reassuring.

Derek knelt in front of me and slipped my feet into the ski boots. He’s right; I thought as he smiled up at me. This is romantic.

And then we went outside. My misgivings returned in earnest when my first lesson proved to be how to fall. “Always fall to the side,” Derek instructed. “Now, let’s try to glide, OK?”

That’s when the romance began to pale. Those slippery skis slid and skidded under my shaky feet. I struggled mightily to glide, but just when I got the stride right, the trail angled downhill. “Crouch forward, squat down, bend your knees,” my husband encouraged. All to no avail as my skis slid out from under me and I, remembering my instructions, toppled to the side.

I then discovered falling down is very easy. Getting up again is not. I lay in the snow while a pair of toddlers on tiny skis scooted past me. “OK, honey, get your skis parallel to your body,” Derek urged. I thrashed about while a couple of octogenarians sailed by.

Finally, upright again, I eyed the trail ahead with suspicion. “Are there any more little hills you want me to know about?” I asked.

Ideally, cross-country skiing is great aerobic exercise. However, the best I could manage was a slow shuffle, like Tim Conway’s old-man character on the “Carol Burnett Show.” The only time my heart rate surged was when I found myself swooping downhill, tottering precariously on those skinny skis.

Soon the drifting flakes began to fall faster, shrouding us in a feathery white blanket. Snow-laden trees surrounded us, enveloping us in a winter hush. And later, at the lodge, the cheese was delicious.

Looking into Derek’s twinkling blue eyes as he unlaced my boots, I made a discovery. The greatest thrill can come from pushing the edges of your comfort zone aside, and seeing the delight it brings to someone you love.

Thrills like that can keep you warm, even when wet snow seeps into your long johns.

This column first appeared in the Spokesman Review.