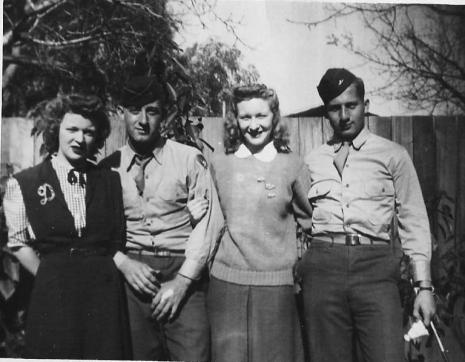 The first time I interviewed Bill and Connie Conaway, Bill didn’t talk much about serving overseas as a B-17 pilot during WWll, but his eyes lit up when he talked about the planes.

He recalled every aircraft he flew and who trained him on it.

But on a subsequent interview he told stories of harrowing missions over Germany, of how he nearly froze when a piece of shrapnel pierced his flight suit as he soared miles above the ground.

And then he told the story that has haunted him for 70 years.

His radio operator, Lynn, a good friend, was killed on a mission.

“The night before we left, we all had dinner together, and his wife and little baby came– that was the last time she saw him.”

He sighed, shaking his head.

“The airplane floor was covered with his blood,” he said, rubbing his eyes with the back of his hand. “I tried to get in touch with his wife for many, many years. I wanted to tell Lynn’s daughter about her dad.”

He was never able to find her when he returned to the States.

His widow, Connie who served in the WAVES called to tell me the news. He died just days before their 71st anniversary.

She’s never forgotten how fortunate they’ve been. Many B-17 pilots never returned.  She said, “I’ve told him many times, ‘I’m lucky to have you, honey.'”

And I’m lucky that I was able to include their story in War Bonds: Love Stories from the Greatest Generation.

But mostly I’m grateful that this gruff pilot, turned school teacher, turned artist, trusted me with his secret.

During an interview he leaned forward in his chair, glanced at Connie and said, “I’ll tell you a secret; I love her more today than I ever have.”