If you don’t want to know how the sausage gets made, you should stop reading now. Seriously. Recently my sisters-in-law and I had our annual Sizzling Sisters Sausage Sunday.

Each year my sister-in-law Camille Jordalen and her Norwegian husband, Kjell, host our family Christmas Eve gathering, which I call “The Festival of Strange Norwegian Meat.”

While steamed Brussels sprouts, boiled potatoes and my favorite, mashed rutabaga, make an appearance, the real star of the annual feast is meat – specifically pork with a side of lamb.

I’ve never been able to embrace the salty tang of pinnekjøtt (cured lamb ribs) but I look forward to ribbe (pork ribs with a thick layer of fat), Swedish meatballs, Swedish potato sausage and two Scandinavian sausages – medisterpølse and medisterkaker.

I’m not exactly sure how the Swedes got involved in our Norwegian meal, but I suspect my mother-in-law and her Swedish heritage had something to do with it.

For several years we bought the potato sausage from Egger’s, but then my sister-in-law, Susie Hval, got a meat grinder. She wanted to try her hand at making homemade bratwurst, and once she conquered that, she was ready for a new challenge.

“Why don’t we make our own medisterpolse and potato sausage?” she asked.

And thus a tradition was born.

Camille makes the medisterkaker on her own because that sausage is formed into patties and fried. The other two are link sausages, which is where the teamwork, fun, and double entendres come in. We’ve given birth to 11 sons between the three of us. Trust me when I say there isn’t a sausage joke we haven’t made or heard. This is also probably why our spouses vacate the house when Sizzling Sisters Sausage Sunday commences.

I suspect watching their wives grind 40 pounds of pork butt and squeeze it into slippery sausage casing makes them a bit squeamish. By the way, those casings are made from pig intestines. Go pig or go home, that’s what we always say.

With our aprons on and hair pulled back in messy buns, we get down to business Pioneer Woman style.

Pork and pork fat is sliced and diced and fed into the grinder. Onions and potatoes are added for the potato sausage.

“This always reminds me of the Play-Doh barber shop,” Susie said.

After two rounds of grinding, we’re ready to squeeze the meat into the casings. The casing is slid on to an attachment on the grinder. It’s a delicate operation because if the sister who is pushing the meat through pushes too fast, sausages can rupture. 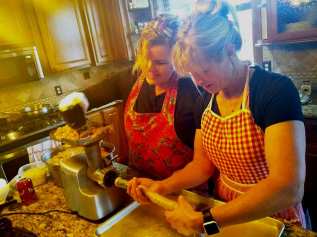 Once we have a long rope, we’re ready make links. This involves a process I call “swinging the sausage” which is Susie’s specialty. Much like jumping rope when we were kids, she swings the sausage till the ends are tight and ready to tie.

Tying the slippery ends is challenging, especially when your hands are coated with pig fat, but we manage to get it done. Actually, Susie manages to get it done. Camille tried tying, but struggled, and I’m a disaster at balloon-tying, so I don’t even attempt it.

For the potato sausage, the casings are pricked with little holes, so they don’t explode upon cooking. This is my job.

While we work we catch up on life and family – that is when we aren’t talking to ourselves. We’ve discovered that each of us tends to keep a running commentary when we’re concentrating, much like we’re the hosts of our own cooking shows. This works great when working alone, but it does get a bit confusing when cooking with others.

Seven hours flew by and at the end of the day we had freezer bags full of sausage, ready to be browned and served on Christmas Eve.

We sampled the sausage and agreed that each year it tastes better. And that secret ingredient? It really isn’t much of a secret – it’s love with a hefty dash of laughter.