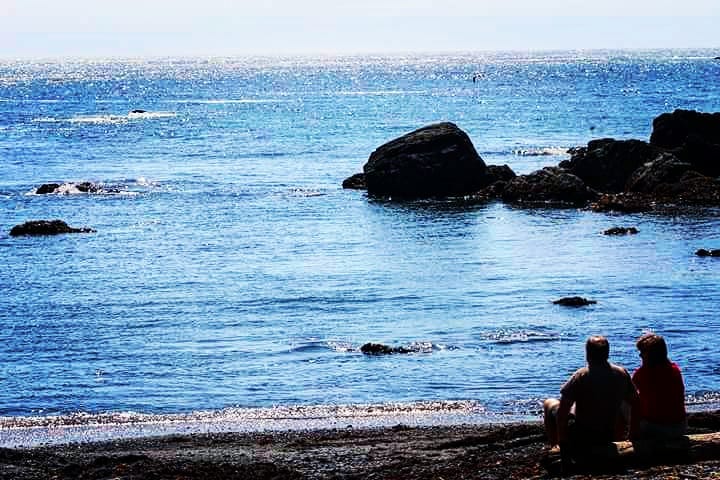 Derek and Cindy Hval at the beach in Crescent City, California

When your youngest child who recently graduated from high school with honors utters such a simple wish, well, what parent wouldn’t want to fulfill it?

Sam is 18, and the window for family road trips is rapidly closing. His desire to see the redwood forest quickly became the focus of our family vacation.

Derek looked at maps and I booked hotels, and last week we returned from a trip that included the ocean, Shakespeare, waterfalls, the Columbia River Gorge and of course, ancient trees.

First I’d like to know what happened to all the Volkswagen Beetles? Every road trip from my childhood resulted in sore shoulders as my siblings and I played “Slugbug” or, as we called it, “Bugslug.” Our kids played it on family trips, too. But we traveled hundreds of miles and didn’t see a single Beetle till we returned to Spokane.

It’s probably just as well, because Sam was the only kid on this trip and you really shouldn’t punch your parents. Or your kids.

We picked Ashland, Oregon, as our central destination, making the grueling drive in one day. Smoke shrouded the landscape across Washington and into Oregon.

Speaking of Oregon, we thought the recently-passed gas law meant we could pump our own gas. Nope. Apparently, it varies by city or county. Derek opted to try at every fill-up, but was rarely successful.

Ashland is home to the Oregon Shakespeare Festival. Derek and I had enjoyed a trip there several years ago, and had been anxious to return. We wanted Sam to see a play and mulled the options. The outdoor Allen Elizabethan Theatre is iconic and offers a fabulous experience, so we bought tickets for “The Book of Will,” which was slated for that theater during our stay.

The smoke-filled skies had me worried. The theater had canceled several performances due to poor air quality. Our hotel clerk said in the event of bad air, they move the play to the high school auditorium. Not at all what we were hoping for.

But first the redwoods. The Jedediah Smith Redwoods State Park is just a two-hour drive from Ashland, so we crossed our fingers as we set off from the smoky city in the morning.

We wound our way through the primeval forest, carefully avoiding gawkers who pulled over on the side of the narrow road to take pictures. Stopping at the Hiouchi Visitor Center 9 miles east of Crescent City, California, we picked up a map and directions to Stout Grove, a half-mile loop walking trail.

The stillness of the redwood forest is surreal. The immensity of the towering trees, the soft sunlight filtering through ancient branches, adds a unique hush, making the grove seem more like a church than a forest.

Indeed, a short time later while exploring a side trail, I happened upon a partially hidden makeshift memorial – a small cross made of sticks and a photo of a bearded man. I imagine this must have been his favorite place.

Sam and I did get the giggles counting how many times Derek said the word “huge.”

Crescent City is a short drive from Jedediah Smith Redwoods State Park. We cruised into the sleepy town looking for a lunch spot with an ocean view.

“Why don’t you drive that way?” I suggested to Derek, pointing at the ocean in the distance.

Amazingly, the street ended at small parking lot with steps leading down to the beach. Even more amazing, we had the whole beach to ourselves! From old growth forest to tide pools, sand, waves and driftwood in 20 minutes.

After beachcombing, we found a harbor-side restaurant, and a chorus of barking seals serenaded us while we ate.

The smoke was clearing in Ashland the next morning, so we spent the day shopping and walking through Lithia Park. I hesitantly made reservations at an outdoor dining spot, but I needn’t have worried. We sat down to dinner under brilliant blue skies and later, stars twinkled above us as we watched the play in the outdoor theater.

In fact, the only rain we encountered was a light drizzle at Multnomah Falls on the way to Hood River the following day.

The rain didn’t dim the beauty of the falls, but it did close the path to the highest point.

We spent the last day of our trip exploring downtown Hood River, and then relaxing in the sun and the wind on the beach, marveling at the windsurfers, riding the waves.

Like most busy families, we’d started vacation tired and stressed. Each of us wrestling with worries both big and small.

Was it when we sat on a piece of driftwood, staring out at the vast blueness of the Pacific Ocean while the waves lapped the shore at our feet?

All I know is the cares and concerns that once loomed so large seemed to shrink, to lighten, to dissipate into the wonder and beauty of nature.

It’s all a matter of perspective, isn’t it?

Cindy and Derek walk through the redwoods