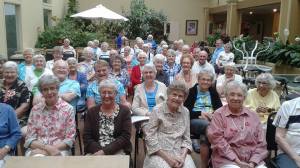 Had a wonderful reading/signing event Saturday, at a local retirement center. The crowd was enthusiastic and engaged and asked wonderful questions. But the best thing was that three very special people live at Fairwood.

Melba Barton (left) is featured in chapter 16, “The Farmer’s Wife,” and Barbara and Louis Anderson’s story is told in chapter 28, “Keeping Time.” As you can tell from the photo above, Louie is still just as dapper and handsome now as he was in 1943 when he served as a B-17 pilot during WWll.

I was very moved during the Q&A Barbara said she’d learned more about Louie’s war experiences during the interviews for War Bonds, than she’d learned in 69 years of marriage. She added, “But there are still things I’d like to know– still questions he hasn’t answered.”

And Louie smiled and looked away.

A special thank you to all who’ve purchased, read or reviewed War Bonds: Love Stories From the Greatest Generation. Because of you, these stories live on.