A year after the publication of War Bonds: Love Stories From the Greatest Generation, the book signings and speaking events start to blur together.

I’ve met so many wonderful people– many of them WWll veterans, who share their memories of their time of service.

But at this week’s event something amazing happened. At every reading I share from Chapter One: Band of Gold. It’s the story of Jerry and Nancy Gleesing.

When they were expecting their first child, Jerry, who served with the 15th Air Force, 459th Bomb Group, was shot down and had to bail out over Hungary. He was quickly captured and spent 3 months as a prisoner of war in Mooseburg, Germany.

It’s a moving story that often prompts tears– including my own. As I read, I noticed an older gentleman take of his glasses and wipe tears as they streamed down his face.

He waited in line to by a book. “My brother was there,” he said. “At the POW camp in Mooseburg. He was on that plane.”

Unbelievable! He looked at the picture below, to see if he could pick out his brother, but his eyesight if failing. He had me sign the book for his 90-year-old brother, who’s still alive and resides in California.
I only wish Jerry Gleesing was still here, so I could tell him I found one of his crew. 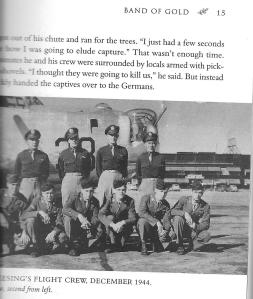 “Why do you still cry? Aren’t you used to the stories by now?” my 15-year-old son asked.

He was curious. He’d just  attended a War Bonds reading with me at the North Spokane County Library because he’s taping a few video clips of my presentation.

The answer is, no, I’m really not “used to the stories.” For example, when I read about a POW’s reaction to seeing the American flag raised when his camp was liberated, I remember the tears that rolled down his wrinkled cheeks when he told me the story. I cried with him that day.

I’m tearing up just thinking about it, now. I don’t know if I’ll ever be able to read that paragraph without tears. These stories are true. These people are real. If their stories don’t evoke some kind of emotion in me, the writer, they’ll never resonate with you, the reader.

It was an especially moving reading for me  because Dean and Betty Ratzman were sitting in the front row.

Dean’s heart had been damaged by Dengue fever during the war in the Pacific. He was told he wouldn’t live past age 40. Yet there he sat in the front row with Betty, his wife of 69 years.

Tears of joy. Tears of sadness. And an awful lot of laughter.

How blessed I’ve been to hear these stories and to share them with the world. I hope I never get used them.

I’ve shared this section from chapter one of War Bonds at just about every reading I’ve done. I don’t think I’ve ever read it without choking up.

Last week I shared it with a group and once again my voice caught and I had to pause and blink away tears. When you celebrate Independence Day today and see the flags waving from wherever you are, please remember freedom isn’t free. That’s more than a cliche– that’s the truth.

And remember my friend Jerry Gleesing, who knew that truth so well.

After three and a half months as a prisoner of war, Jerry’s camp at Mooseburg, Germany was liberated. “We saw the tanks come over the hill,” he recalled. “Everyone was whooping and hollering. Then the American flag was raised, and it was dead silent.” His voice broke. “It was like coming home.”

Just had to write and let you know how much I enjoyed reading your latest column. I’ve been your fan forever, and now that my wife and I no longer spend winters in AZ, I won’t miss any more of them.