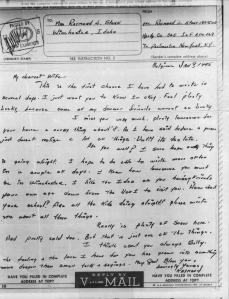 During WWII V-Mail (Victory Mail) was the primary way servicemen were able to communicate with their loved ones back home.
In this note, Ray Stone writes to his wife “I think about you always Betty. The feeling and the love I have for you has grown into something much deeper than small talk & sayings.”
He wrote this from Belgium during the Battle of the Bulge.

The horrors of war became most apparent to the young paratrooper when  he and his company liberated Camp Wobbelin in Germany. They found 1,000 dead– mostly Jews and another 3,000 dying prisoners in the compound.

Stone went on to become a lifelong educator, eventually serving as mayor of Coeur d’Alene, Idaho and received the Raoul Wallenburg Award, as well as the Eisenhower Liberation Medal.

Ray and Betty Stone’s story is featured in a chapter titled, “Fireworks.”