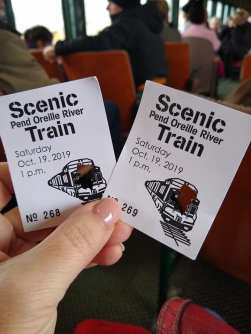 When our train pulled into the tiny whistle-stop station at Dalkena, Washington, I spotted some unsavory types milling around the tracks.

A pint-size pirate, wearing a bandana over her face, clutched her grandpa’s hand and boarded the car in front of us.

Then the door to our carriage slid open, and a mean-looking hombre swaggered down the aisle. Her black cowboy hat was a dead giveaway. Everyone knows only outlaws wear them. Sure enough, within minutes the desperado barked, “All right, hand it over – gimme yer money!”

She flourished her weapon wildly at men, women and even small children.

I’d never been “robbed” at banana-point before, but I hastily stuffed some cash into her bag, and tried not to make eye contact.

Thankfully, we’d been warned in advance that train robberies frequently occur on the Scenic Pend Oreille River Train. Even better, the cash collected goes to support the many community projects of the Newport/Priest River Rotary Club, which operates the ride.

The little girl in front of us wasn’t feeling quite as generous.

When she realized the robbery wasn’t real, she turned to her mom.

But when the whistle blew and the train lurched forward, she pressed her nose to the window, captivated like the rest of us by the autumn beauty that shone brightly despite the rain. 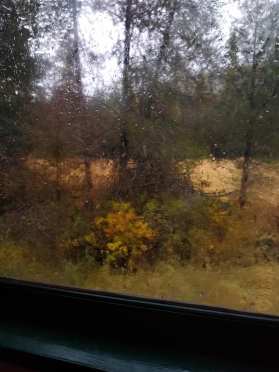 “I’m so glad we did this,” my husband said, as we settled back into our seats, watching the deep green of the forest, give way to golden fields surrounded by russet maples and amber birches.

We’d been so disappointed when in 2016, the North Pend Oreille Valley Lions Club had to end the excursion train ride between Ione and Metaline Falls that they’d operated for 35 years. The ride was an item on our bucket list that we’d never got around to.

In 2017, the Newport/Priest River Rotary Club partnered with the Pend Oreille Valley Railroad to operate a new excursion ride. This time we weren’t going to miss out.

Starting in Newport, Washington, the 9-mile, 90-minute ride, follows the Pend Oreille River to Dalkena (where train “robberies” occur) and back to Newport.

The train features three classic railroad coaches and three open-air cars. The excursion operates rain or shine, and there was plenty of rain Saturday. The drizzle didn’t daunt the 300-some hearty travelers who waited to board the 1 p.m. ride.

Seating is first come, first served, so Derek and I were glad we snagged seats in “The Logger,” an enclosed coach on loan from the Spokane Railroad Historical Society.

Many came prepared with blankets and quilts, and chose the chilly seats because they offer better views than peering at the scenery through rain-streaked windows.

But no matter where you sit, the views are still spectacular.

The train runs on a historic railroad that’s one of the last short lines still operating. The track was built between 1907 and 1910 by Frederick Blackwell to transport people, logs, lumber and cement.

As we chugged along the Pend Oreille River, we saw hundreds of pilings from the long-defunct Dalkena Mill sprouting from the water. The pilings once held acres of logs. Now they provide perches for ospreys and eagles.

We traveled away from the river and across Highway 20 through forests and pastures. Sharp eyes can spot a variety of wildlife including coyotes, moose, bears, deer and turkeys.

The beautiful scenery and fresh air made us hungry, so after the ride we drove to Priest River, Idaho, and enjoyed a delicious meal at The Settlement Kitchen and Craft Tavern.

Who knew I’d have to travel to Idaho to sample my first watermelon radish? The colorful and tasty veggie was part of an appetizer featuring pumpkin hummus.

There’s still time for you to catch the train. The Scenic Pend Oreille River Train’s final excursions of the season are this weekend.

Bundle up and enjoy the ride, but beware of black-hatted, banana-toting bandits.