You never know where your book will end up.

Today I got a note from a reader who purchased a copy of War Bonds to donate to her church auction.

“Spokane Valley United Methodist Church raised enough money to send 35 children to camp, including some from Hearth Homes and Family Promise who were homeless,” she wrote. “Your book was part of making that happen.”

That’s something that would delight each of the 36 couples in War Bonds as much as it delights me.

Books can make a difference in the most unexpectedly wonderful ways! 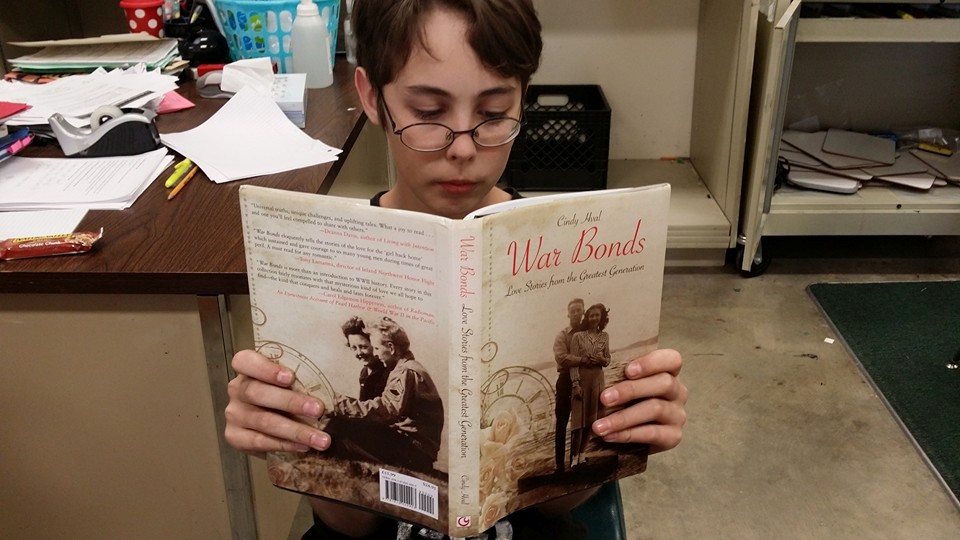 As a 21-year-old sailor stationed at Naval Air Station Kaneohe, Boyer had earned membership into an exclusive club: the Pearl Harbor Survivors Association.

Though he was an aviation machinist’s mate, Boyer was assigned to service and drive the Navy’s trucks at Kaneohe. The morning of Dec. 7, 1941, he’d just dropped off some sailors at church and was on his way back, when he saw several khaki-colored planes approaching fast and low.

In newspaper interviews, Boyer shared his memories of the horrific attack.

“I said, ‘Look at the show the Army’s putting on! Then I saw the big ol’ red meatballs on the wings of the plane and I said, ‘Army, hell!’ ” he recalled. “The planes were coming over us, shooting at us and dropping bombs.”

With the truck still moving, Boyer dove out and took shelter under another truck parked a few yards away.

He stayed under that truck until the enemy planes passed, then he ran to a large tin shed that served as a garage for the trucks at Kaneohe.

“Time seemed like forever,” he said. “I was pretty scared.”

He wasn’t the only one frightened. He told of a fellow sailor on guard duty who shot at a fence post. “He swore it moved,” he recalled, grinning.

But he didn’t smile when he talked about the results of the attack. Twenty Americans died on the base at Kaneohe that day, and as for the aircraft – “they did a hell of job,” Boyer said. “They got every warplane on Kaneohe.”

Four years and one day after the attack on Pearl Harbor, he married Irene Britton. They celebrated their 70th anniversary in December.

After 20 years, Boyer retired as a chief petty officer, but he couldn’t quite leave Navy life behind. He spent the next 22 years working in civil service for the Navy.

Upon moving to Spokane Valley in 1998, he joined the Lilac City Chapter of the national Pearl Harbor Survivors Association. He was especially close to fellow survivor John (Sid) Kennedy, whom he’d met in 1941 at aviation machinist school in San Diego. Later they were both sent to Kaneohe. Kennedy died July 7, 2015, and at his funeral Boyer told a friend, “I guess he went on ahead without me.”

At one time there were 125 active members of the Lilac City Chapter of the Pearl Harbor Survivors Association. Only one, Ray Garland, 93, remains.

“It’s kind of a lonely feeling,” he said.

“Charlie was much like Ray Daves to me,” she said. “Of all the Pearl Harbor survivors those two were the ones most like my own father: kind, gentle, soft-spoken, humble, voracious readers, towering intellects.”

She admired his cheerful spirit and compassion.

“Most people get cranky when they don’t feel well or things don’t go right. Charlie never did. It was just his nature to smile and speak softly to everyone around him.”

Three weeks ago as his father signed papers for hospice care, Steve Boyer choked up. His dad noticed his distress and said, “Don’t feel bad. I’ve had a great life – and a very, very long life.”

While many knew Charlie Boyer as a Pearl Harbor survivor, to his son, he was just Dad.

“I didn’t even know he was a Pearl Harbor survivor until he moved to Spokane Valley,” he said. “He never talked about it. He was just my dad and always will be. I’m going to miss him.” 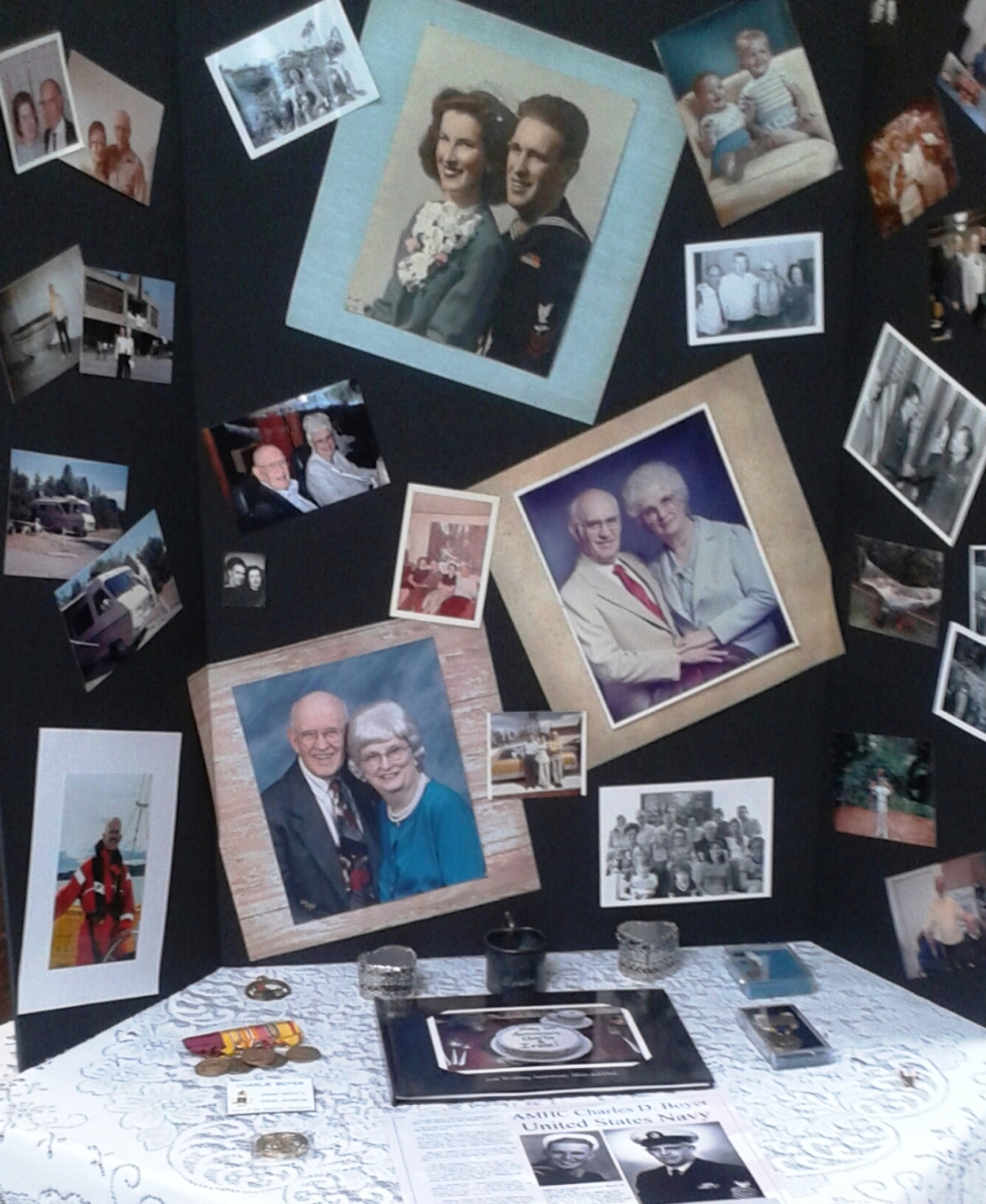 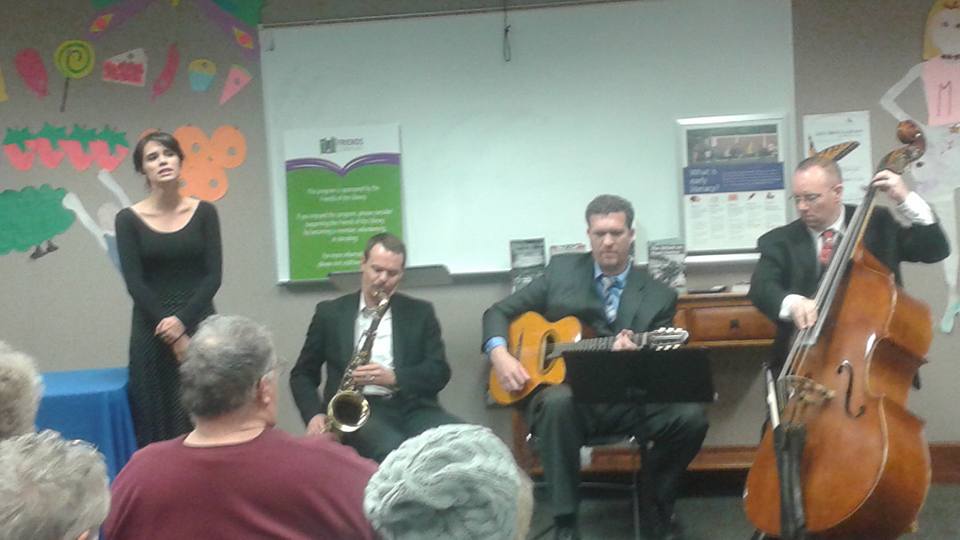 These events combine the music of the Greatest Generation with stories from War Bonds.

Hot Club of Spokane sets the tone with sweet songs like “The Nearness of You” and “Stars Fell on Alabama,” then I share a few excerpts from War Bonds: Love Stories From the Greatest Generation.

Spokane County Library District specifically wanted these events during the first week of December to commemorate Pearl Harbor Day and honor the men and women who have sacrificed so much for our county.

You still have to time to catch us. We’ll be at Moran Prairie Library Tuesday, December 8 and at Spokane Valley Library Wednesday, December 9. Both events are at 7 PM and admittance is free. 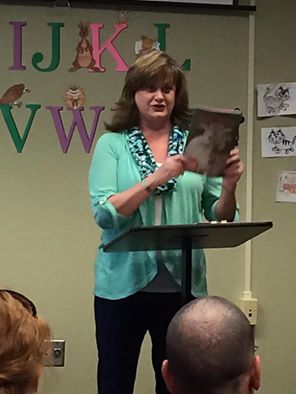 Bookstores are the best places on earth and since War Bonds was released in February, I’ve spent a lot of time in bookstores.

On Friday, I had a reading at the Well-Read Moose in Coeur d’ Alene. This charming store features the perfect trifecta: books, wine and coffee! And my friend, Phil, aka Idaho Dad came to visit! 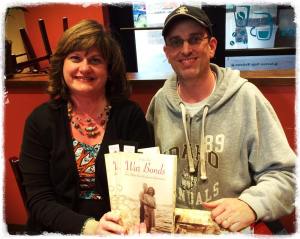 On Saturday, I signed copies of my books at Barnes & Noble in Spokane Valley.

A rainy day meant lots of people browsing the shelves. The staff was welcoming and wonderful and kept me supplied with coffee. Even better, War Bonds bride, Bonnie Shaw came to visit! 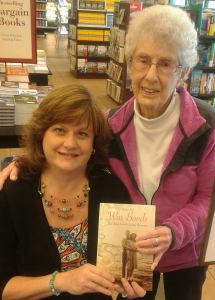 I love it when my War Bonds family attends a signing. The Shaw’s story is featured in  a chapter titled, “Little Things Add Up To Love.”

An even bigger surprise was a visit from Eric Loer and his family! He said, “I’m Eric and my picture is in your book!”

Yep. That’s baby Eric above featured in his parent’s chapter “From Sailor to Preacher.”

And that’s Eric below with his wife, son and granddaughters. 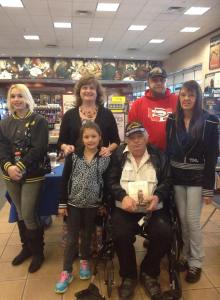 At every signing or reading event, I feel like my War Bonds family grows.

What a wonderful thing!

If you weren’t able to attend these events, I signed lots of extra copies, so autographed books are available at both of these locations. 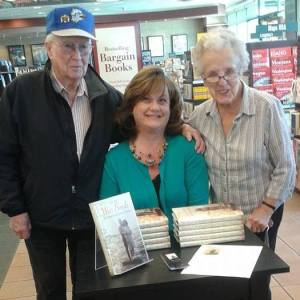 I was delighted to spend a little bit of time with Rusty and Marie Clemons yesterday at a local Barnes & Noble store. We had an impromtu signing because their daughter was visiting from Montana and wanted to take a stack of War Bonds back with her.

Rusty and Marie have been married 68 years and are still just as sweet and fiesty as ever. Their story is told in Chapter Six “Dishpan Hands.”