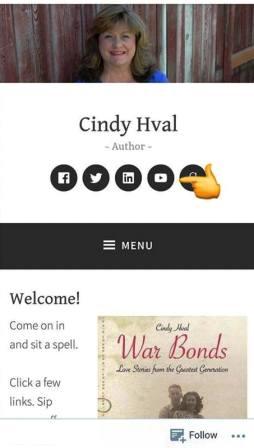 That handy little button at the top of my homepage will take you to my new YouTube channel.

That’s where you can find all the Front Porch episodes that air each week on the Spokane Talks television show on Fox 28 Spokane.

You know. In case you aren’t tuning in at 8 AM Saturday morning 🙂

I hope you’ll check out these segments and I look forward to hearing what you think!

Each fall and winter, I’m blessed to use the home of snowbird friends as a writing retreat. When they left Spokane in September, they left behind a new member of the household – Rosie the iRobot Roomba.

Basically, it’s a vacuum cleaner. A vacuum that can be controlled by my friends’ iPhones, meaning if they wanted to, they could turn Rosie on from the safety of the southern climes and terrify the writer typing away in the solitude of their home.

Last month with the homeowners’ return imminent, I decided to let Rosie do her thing and clean up any sandwich crumbs or M&M’s I may have lost track of.

I read the introductory note they’d left for me and approached Rosie with confidence. A push of the button and she roared to life.

Startled by the sound I took a step back. Rosie followed.

Obediently, she scooted under the coffee table, while I retreated to the safety of my desk.

Fascinated, I watched her zig and zag across the carpet. Her pattern was impossible to decipher. After a few passes in front of the fireplace, she headed toward a nearby bedroom, where she spent an inordinate amount of time under the bed.

I texted my friend.

“I’m letting Rosie chase me around. Does she work on hard surfaces? I haven’t seen her in the bathroom yet.”

My friend replied, “Yes, she will do it all. But she has her ways that to us mortals may seem absurd.”

No kidding. Rosie would never pass a field sobriety test. When she emerged from the bedroom, she spent several dizzying minutes cleaning under a chair before weaving down the hall like she’d had one too many martinis.

But she did a fantastic job and safely docked herself in her charging port. I then took her upstairs and set her free.

I was engrossed in my manuscript when I heard something that sounded like an alarm. My friend had warned me Rosie was prone to getting stuck under the living room sofa.

I dashed upstairs, following the pinging sound, and then heard the plaintive refrain.

Poor Rosie. I hauled her out from under the couch.

“You silly girl,” I said, and gave her a quick pat.

It seems Rosie and Thor, my cat, have a lot in common, though Thor makes more messes than he cleans up.

I reported the successful suck-up operation to my husband when I got home. Derek is so app-averse; I knew he’d never fall for any techno gizmos.

Turns out I was wrong.

This weekend he announced, “Hey, honey, guess what I can turn on with my phone?”

None of the replies I thought of seemed appropriate.

He beckoned me to our darkened living room and pulled out his phone.

Suddenly a lamp lit up.

“And I can dim it too, for mood lighting,” Derek enthused, and proudly demonstrated.

“I don’t understand. We don’t have iPhones. How does it work?”

It seems a friend had given Derek a Smart Wi-Fi LED light bulb for his birthday last summer, and my experience with Rosie had prompted him to install it.

“I guess so, but I’m standing right here. I can turn it on without a phone,” I replied.

He shook his head.

“I know, but I can turn it on when I pull in the driveway, or I can dim it when we watch movies. Pretty cool new technology, huh?”

I didn’t have the heart to tell him the technology was hardly new. Why all over the city, there were probably dozens of people using the Clapper to clap on/clap off their lights.

Wisely, I remembered how nice it had been to have Rosie clean the house while I worked. Then I snuggled next to Derek on the couch, while he dimmed the lights.

Our future’s looking “Rosier” all the time.