We eagerly scanned the swarms of blue-robed students filing into the McCarthey Athletic Center on Friday evening. The strains of “Pomp and Circumstance” swelled, and then we spotted our baby boy – not much of a baby anymore.

As Sam received his diploma and was recognized as an honors student who’s already earned 87 credits through the Running Start program at Eastern Washington University, another chapter in our parenting lives closed.

Our fourth and final son graduated from high school.

It was an occasion I couldn’t even imagine 18 years ago when he struggled for every breath in the Neonatal Intensive Care Unit at now-Providence Sacred Heart Medical Center.

On a golden September day, Sam, our grand finale, had entered the world weighing in at a whopping 9 pounds, 9 ounces. He had his father’s broad shoulders and the trace of a dimple in his chin.

He also had a hole in his diaphragm.

Within hours of his birth we were told our baby had congenital diaphragmatic hernia. A hole in his diaphragm hadn’t closed early in gestation. As a result, his internal organs pushed into his chest cavity, squashing his developing lungs. Only Sam’s right lung was fully formed. Our newborn was given a 50/50 chance of survival.

Milestones like a commencement ceremony remind us of how close we came to losing this child.

Late Friday night following the celebration, while the rest of the household slept, Derek and I quietly recalled Sam’s desperate first days.

He’d been flown by helicopter from Holy Family Hospital to Sacred Heart Medical Center an hour after his birth. Having just given birth I was forced to stay behind while Derek drove downtown.

“When I walked into the NICU, they had Sam restrained on a table,” he recalled. “His back was arched, his face red. He was screaming his head off. They told me he was a fighter, but that I needed to leave the room for a minute. They said they were going to sedate him, that his blood pressure was dangerously high. When they let me back in, Sam was silent and still. So very still.”

And 18 years later, the tears fell as he remembered his helplessness in the face of his son’s need.

My own memories of that day still haunt.

Twelve hours after his birth, I stood next to Sam’s bed. Tubes and wires protruded from the top of his head to the soles of his feet. The ominous whooshing of the ventilator and the beeping and whirring of machines filled the room. He was so fragile that the sound of a voice raised above a whisper sent his blood pressure skyrocketing.

I believe in the power of prayer. I always have. But that morning I could find no words. So I reached two fingers under the maze of wires, rested them on his laboring chest and whispered, please. When he exhaled I whispered thank you.

In the weeks that followed those words became a ritual.

Even as he grew healthy and strong, with no lingering complications, each breath simply seemed miraculous to me. Life is a gift, but how casually we treat it, until we’re forced to confront its fragility.

More nights than I can count, I’d slip into Sam’s room, lay my hand on his chest and whisper please and thank you as he breathed. Over the years that prayer grew to encompass much more than his physical health.

Like his dad, Sam’s going to continue his education at EWU. He plans to become a high school English teacher and will live at home for a while, so our nest won’t be empty anytime soon.

Following the commencement ceremony, we posed for photos. Sam now towers above me, and when I wrap my arms around him, my head rests near his heart.

Once again I found myself whispering please when he inhaled, thank you when he exhaled. 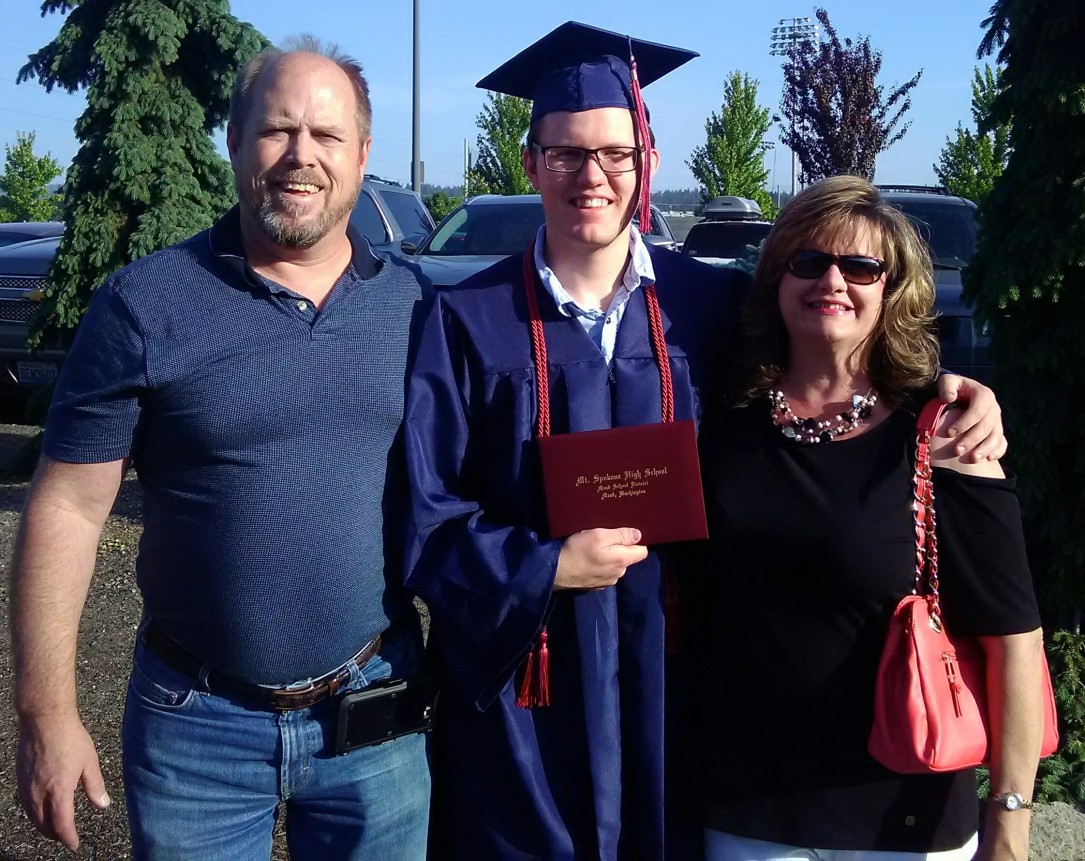