The newest member of our family arrived just in time for Mother’s Day. Her name is Ruby Sue, and I’m absolutely in love.

I’m worried my friends will tire of hearing me extol her virtues, but she just has so darn many! She’s helpful, easygoing, and so far has been remarkably patient with me as we get to know each other.

Our youngest has been driving the 1995 Dodge Caravan that his three older brothers drove. The slider door doesn’t open. The passenger door opens from the inside only. There’s no radio. No air-conditioning. It’s been wrecked at least once by each driver, but the Green Monster seems impossible to kill.

Still my husband said the beast won’t live forever, and it was time to pass Golda MyDear, my 2011 Oldsmobile Intrigue, down to Sam.

Who knew aging minivans with peeling paint were manly?

Anyway, Derek diligently searched the internet and found the Ford Escape at a local Subaru dealership.

He showed me the photo and the specs.

I smiled, already enthralled by her sparkly red paint job and sporty trim.

Ruby Sue drove like a dream, but the back-up camera proved disconcerting. Both Derek and I swiveled our heads and peered at the side mirrors while ignoring the screen in front of us.

The salesman left us to discuss the purchase. Taking a car for a test drive is like going to a shelter to “look” at cats or dogs. You’d better be prepared to shell out some cash and take one home because chances are you will fall in love.

Our discussion was brief thanks to the research Derek had already done. All he needed to know was would low-tech Cindy be happy driving high-tech Ruby Sue.

After a sheaf of paperwork completed the adoption, Derek asked if I wanted to drive her home while he drove Golda back to work.

“Of course!” I said, as I kissed him goodbye and approached my new red ride.

The salesman had already explained the keyless ignition meant I just had to be within a few feet of the door and when I touched the handle it would unlock, which it did. What he failed to demonstrate was how to start the car.

Sliding behind the wheel, I adjusted the mirrors and the lumbar support on the smooth leather seat. Then I pushed the start button. Nothing happened. I fiddled with some things and tried again. The radio came on. I pushed more things on the touch screen. The air conditioner came on.

Finally, I read the screen. “Push brake to start car.”

It’s been two weeks since I drove her home, and I must admit the learning curve is a bit steeper than I anticipated. I did scan the manual, but I’ve always been a learn-by-doing person.

This rig comes not so much with bells and whistles, but with beeps and bleeps, that I’m still deciphering.

For example, when I pulled into a parking space, Ruby Sue started beeping. I slammed the brake and looked around. No lights were flashing. Auto self-destruct mode hadn’t been activated. It took a few more trips for me to realize the car was just alerting me to the proximity of the curb.

Ruby Sue is quite chatty. Bluetooth technology enabled her to sync with my phone automatically. No more ear pieces or headsets to lose! I can receive and send calls and texts using the buttons on the steering wheel. In fact, everything in the Escape Titanium operates through voice command – the radio, the climate control, even the built-in navigation system.

So far, Ruby and I haven’t had any arguments about the best way to get somewhere.

But we’re still working out a few glitches – mine, not her’s. The trunk is supposed to open and close when I swipe my foot under the tailgate – no more juggling grocery bags and fiddling with keys. Alas, only Derek has figured out how to activate the sensor with one swipe of his foot.

And frankly, the self-parking option freaks us both out. Last night we decided to try it for the first time in the safety of our neighborhood.

We pushed the parking assist button and watched, stunned, as Ruby Sue ably parallel parked herself between our son’s car and our garbage cans.

It’s a surreal experience to sit in the driver’s seat and watch the steering wheel spin as your car parks itself, but I have to say this could be a game-changer and a solution for my frequent downtown parking dilemmas.

My least favorite part of my job used to be all the driving. But now, I take the long way everywhere just to spend more time with Ruby Sue.

It’s safe to say I’ve left Intrigue behind, and now that I’ve Escaped there’s no turning back. 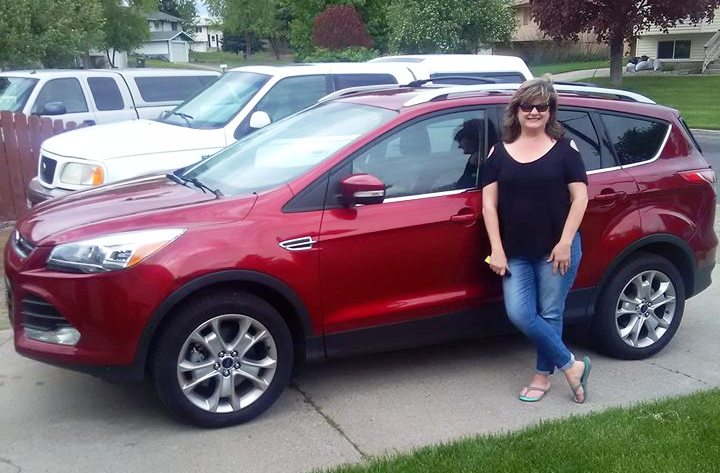 Contact Cindy Hval at dchval@juno.com. She is the author of “War Bonds: Love Stories From the Greatest Generation.” Her previous columns are available online at http://www.spokesman.com/staff/cindy-hval/ Follow her on Twitter at @CindyHval