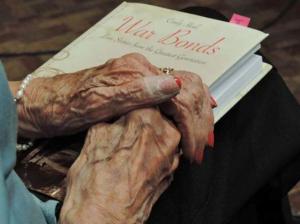 Donna Stafford one of the brides featured in War Bonds, holds her copy during a reading at the Coeur d’Alene Library Wedneday night. The photo was taken by Cindy Mitchell, daughter-in-law of one of the couple’s featured in the book.

I can’t tell you what it means to me to have people featured in War Bonds attend readings. To see the delight on their faces as they turn to their chapters, to see the tears in their eyes as they hear me share their memories… it’s such a privilege.

And during the signings I get to hear so many stories of parents or grandparents who served in WWll. It’s a wonderful thing! I’m so thankful for the ovewhelming positive response to War Bonds.