2,142 miles. That’s the driving distance between Spokane and Columbus, Ohio. Even if you fly, that’s a heck of a long way, especially now.

But our recent pre-pandemic-planned trip was worth every mile and occasional discomfort, to celebrate our youngest son’s graduation, and to see our twin grandsons.

We wanted to celebrate his amazing accomplishment in a meaningful way – and for him nothing could be more meaningful than seeing his brother, Alex, and meeting his identical twin nephews.

Sam hasn’t seen Alex in five years, and Derek’s 76-year-old mom has been longing to meet her first great-grandchildren. So even when the airline changed our flights to include a five-hour layover at SeaTac on the way over and a four-hour layover on the way back, we were just relieved our flights weren’t canceled.

Apparently, air travel is picking up. SeaTac seemed busier than ever and everyone – and I do mean everyone – wore masks and endeavored to maintain social distancing. Even better, Alaska Airlines is continuing to limit seating. Every middle seat was empty on our flights to and from Columbus.

We arrived in Ohio, with just enough light to find our Airbnb house a few blocks away from our son’s place. However, it was dark by the time Derek and I finished our grocery store run, and we got hopelessly lost on our way back. Our GPS was no help. Thankfully, Alex and Brooke are night owls and were able to talk us in by phone.

And then? Four blissful, baby-filled days with The World’s Most Beautiful Boys. At just shy of seven-months, Adam and Nick had already changed so much since our last visit. 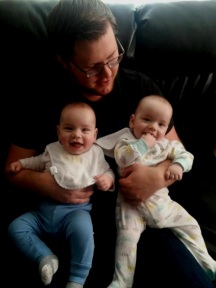 That right there was worth the price of the trip, though I did ask him to wait a few years, and maybe not move any place as far away as Ohio.

He and Alex spent hours together, making up for lost time, making new memories, making every minute together count.

They went to the Book Loft in the German Village in Columbus, one of the nation’s largest independent bookstores. It’s so big; they lost Grandma Nita in the two- story maze of book-filled nooks and crannies.

And then while the guys lunched at the Thurman Cafe, featured on the television shows “Diners, Drive-Ins and Dives,” and “Man vs. Food,” we girls bonded over babies.

And oh, those babies! I was filming great-grandma tickling Adam’s bare feet, when he turned and saw me. Recognition, excitement and love beamed from his face as he reached for me.

I thought when I became a mother I couldn’t love anything more fiercely than my sons. And then my grandsons arrived, and my heart grew at least two sizes that day.

Spending Father’s Day watching my son dote on his sons, filled me with indescribable joy. I never doubted Alex would be a wonderful dad; after all, he had the best role model.

Speaking of Derek, true to tradition, every time a twin nodded off in his arms, Papa fell asleep, too.

But when Adam or Nick fell asleep in my arms, I didn’t want to miss a thing.

In fact, if I could freeze one moment in time it would be this: the feel of my grandson’s head heavy on my shoulder, the rise and fall of his chest against mine.

If I could bottle one scent it would be this: the sweet smell of his head tucked beneath my chin.

If I could capture one sound to listen to repeatedly it would be this: his sleepy sighs, soft against my ear.

After 2,142 miles, and more time at SeaTac than anyone would ever want to spend, we’d do it again in a heartbeat.

On Saturday, June 20 I’ll be doing a reading at the East Bonner County Library, 1407 Cedar St, Sandpoint, ID. Books will be available for purchase.
Tell your friends. Tell your neighbors.
Hope to see you there! 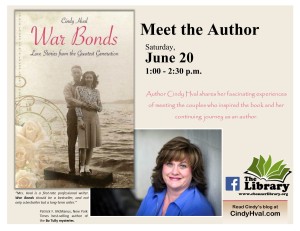