We’d barely finished our appetizers when Jimmy “the Gyp” got bashed in the back of the head. I clutched my champagne glass as Crusher, the Don’s bodyguard, rushed past our table.

Turns out that was just the first fatality of many aboard ship.

“I told you business trips are more exciting when you bring me,” I said to my husband.

He tipped his fedora.

“Everything is more exciting when you’re along,” Derek replied.

Last month he mentioned he had to go to Yakima and Tri-Cities to see some customers, and was considering spending a day in Walla Walla if I would join him.

What I heard was, “Want to go on an epic adventure with me? I’ll be traveling to the Palm Springs of Washington and then to the site of a decommissioned nuclear production facility. We could add an overnight in wine country, if you want.”

So, of course, I agreed.

Thanks to WiFi I can work from anywhere, and if anywhere includes a chaise lounge beside a pool, so much the better.

Our overnight in Yakima was quick, but we knew we’d be spending a couple days in the Tri-Cities. That’s when I remembered some friends had texted us about the fun they had aboard a murder mystery cruise on the Columbia River.

We found the Water2Wine website and booked a pair of tickets. Our purchase included a 2 1/2-hour cruise on the Columbia, complimentary glasses of champagne, a four-course dinner, and a murder mystery presented by the Desert Dahlias theater group.

On a sparkling summer evening, we boarded the 96-foot Chrysalis luxury yacht. Programs listing the cast of characters for “Mafia Murders” waited at our table. We were instructed to interact with the cast, ask questions and perhaps even solve the mystery. Many of the guests wore vintage 1920s-style clothing, which added to the fun.

As plots go, this one was as thin as the paper the program was printed on. A “Babyface” Don, a jealous older brother, a hijacked liquor shipment, a moll, a troubled sister, a violent bodyguard, a mafia accountant and his twin brother, and a long-suffering Italian auntie.

Oh yeah, and lots of murder and mayhem.

Deft servers delivered food and drink while the melodrama evolved around us. The mighty Columbia provided a beautiful backdrop.

Between courses, we spent some time on deck, enjoying the warm evening on the water.

A commotion broke out behind us as we returned to our table. Crusher, the bodyguard, collapsed, his throat slit.

Surprisingly, nothing whets the appetite like a dead body on the floor behind you. However, as Derek sliced into his perfectly prepared steak, the Sneak approached him.

“You there. Youse look like a big guy. We need a bodyguard, see. Crusher, he got whacked, and we can’t leave the Don unprotected.”

My husband’s 24-year military career did include some hand-to-hand combat instruction, so he rather expertly “disarmed” the Sneak, all the while grinning at me. 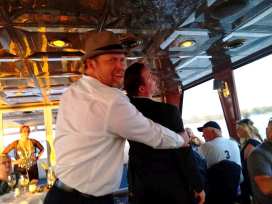 While he could strip an imaginary gun from the hand of an assailant, he couldn’t prevent what happened next.

As dessert was served, Babyface drank a poisoned cocktail and collapsed at our feet. Before Derek could be berated, or beheaded for his lapse in duty, shots were fired and the Sneak fell in a crumpled heap.

“No offense, honey, but I think it’s best if you stay in the industrial tooling business,” I said, patting Derek’s arm.

He grinned and dug into his strawberry-topped cake.

As to whodunit? I’m not one to spoil a mystery. You’ll have to book your own cruise to find the answer.

The sun set as the Chrysalis sailed toward the dock.

“I think I should take you on all my business trips,” Derek said, putting his arm around me.

And who am I to argue with a former mafia bodyguard?

She breezed by me, her skinny legs pumping hard, her hair, untethered by a helmet, flew straight behind her like Superman’s cape.

As she leaned into a turn, I caught the flash of her grin before she became a blip on my horizon.

Just a girl on a bike on a sunny spring day, but she took my breath away.

I remember riding my bike just like that. Tearing off after school, standing to pump my legs faster, and flinging my bike down in a friend’s front yard for an afternoon of play.

The girl reminded me of a question my friend Sarah had posted on Facebook: What do you miss most about your childhood? What do you love about adulthood?

Sarah, who grew up in Southern California, misses the ocean.

I replied that what I miss most about childhood is having time to read. Actually, what I really miss is having time – that delicious feeling of hours stretching before you, waiting to be filled with books. Or bikes.

It’s funny how as teenagers we chafe under parental restrictions and pine for the freedom of adulthood. It seems to me there’s a lot of freedom in childhood. At least there was in mine.

Oh, I had to go to school. There was homework and some chores. But mostly there was time to play. Growing up in the ’70s we didn’t have organized play dates. Mom was an at-home mother who didn’t drive, so my friends mostly lived in my neighborhood. After school – and a quick snack– I’d hop on my bike. No cellphone. No helmet. Just the unbreakable rule to be home by 5 p.m. because that’s when Dad got home.

Of course, there were rules I hated. A ridiculously early bedtime, limited television viewing, my mother being in charge of my wardrobe, and worst of all no reading in bed after 9. That’s why flashlights were invented and probably why I have terrible vision today.

One of the best things about being an adult is being able to read in bed as long as I want. The irony is now I often find myself nodding off before midnight.

Which brings me to the second part of Sarah’s question: What do you love most about adulthood?

My answer? I enjoy having meaningful work and the lifelong love of a truly good man – both things I dreamed of as a child.

Motherhood has been my most meaningful work by far. For many years, nurturing four baby boys to adulthood consumed my heart and my hours.

My sons still consume my heart, but the remaining two under my roof no longer require much nurturing. They do require feeding, and seem to enjoy an occasional hug, and sometimes conversations about goals, hopes and dreams. But they’re independent souls who get themselves to work and to school without assistance.

I’m so thankful that my work that earns a paycheck is also meaningful. Local news matters now more than ever. It’s a privilege to share community stories whether about lasting marriages, new businesses, successful students, or great nonprofits.

And despite a deadline-driven work life, my husband and I have more time together. After years of heavy-duty parenting, it’s wonderful to discover how much we still enjoy each other’s company. Weekend getaways, weekly date nights or just hanging out at home, have helped us anticipate, instead of dread, the empty nest.

It’s not quite the same feeling as riding your bike through the neighborhood without a care in the world, but it’s nice just the same.

I think sometimes we find ourselves so bent under the weight of adult responsibilities that we lose our capacity for joy, for wonder, for play.

Childhood pleasures versus adult perks? Perhaps we can have both.

I haven’t owned a bike since childhood. Maybe it’s time to ride again.