Take a group of authors. Give them name badges. Turn them loose in a bookstore. That’s the recipe for Indies First held each year on Small Business Saturday.

The event brings together authors, readers, and publishers in support of independent bookstores. Authors and local celebrities volunteer at events across the country, and publishers offer special terms on books and exclusives.

I had a blast as usual at Auntie’s Bookstore. Chatting with readers, helping them find great gift ideas and catching up with these great authors is always fun.

One Spokesman Review reader said she came in just to see Jack Nisbet and me, but she walked out with Shop Small shopping bag filled with books. That’s the danger and delight of hanging out in a bookstore!
Another reader stopped by to make sure I was alright. My Thanksgiving column about sometimes finding it hard to be grateful, prompted her concern.

At the end of my shift I rewarded myself with a copy of the delightful anthology Pie & Whiskey: Writers under the Influence of Butter & Booze. My husband and I are reading it aloud every night before bed. It’s a hoot. Honestly, Sam Ligon’s whiskey cocktail recipes are my favorite part. Some drink recipes call for things like a soul, a pistol, a Bible and a sword, but you can still make the drinks without them.

Indies First offers a great way to get customers into independent bookstores, but it’s even more important to support local businesses and Shop Small all year long.

After all, Santa does!

In this column for the Spokesman Review, I address the importance of keeping magic and make=believe alive for our children– especially now.

I was smiling as we walked out of the movie theater into the warm summer night.

“That was absolutely magical,” I said.

My sons, 16 and 21, nodded, but they didn’t seem as enthralled by “The BFG” as I’d been. The movie, based on the book by Roald Dahl, tells the story of an unlikely friendship between an orphan girl named Sophie and the Big Friendly Giant. The two join forces to rid the world of mean, nasty giants.

I loved the retelling. It brought back memories of curling up and reading the book with my second son, who was notoriously difficult to get to sit still and read anything at all. Dahl’s books were just scary enough and just off-kilter enough to capture his imagination and still his ever-churning legs.

The week before, we’d seen “Finding Dory,” and both sons preferred that movie to “The BFG.”

Not me. While “Dory” was a fun film with great visual elements, humor and a compelling message, it lacked the heart of “The BFG.” It lacked magic.

For me, the best part about being a parent has been the ongoing permission to indulge in my love of make-believe. From sharing beloved childhood favorite films and books with my boys to discovering new stories and new adventures with them, parenthood has allowed me to retain a bit of the ability to believe in the impossible.

Perhaps that’s why I reacted so strongly when my youngest got in the car one day after kindergarten and announced, “There’s no such thing as Santa Claus.”

Furious, I whipped around and gave his older brothers the “look” – you know the scary glare meant to stop even the naughtiest child in their tracks. My offspring have dubbed it “Mom’s Death Ray.”

Taking a deep breath, I asked, “Why do you say that, Sam?”

“Tyler’s mom helped us with Christmas crafts today, and we were talking about what we wanted Santa to bring us for Christmas. She said, ‘Santa Claus is a made-up character, and he doesn’t take presents to children all over the world.’ Is she right? Is there really no such thing as Santa?”

I looked into his troubled blue eyes and tried to gauge his desire to know with his longing to believe.

He scratched his head, looked at his brothers and then replied, “Oh, he’s real all right, but I think he has help getting all those presents delivered.”

I know not all parents agree that a healthy dose of make-believe makes for a happy childhood. For instance, one of my sons told me of a millennial parent in his acquaintance who told him that allowing his preschoolers to believe in Santa and the Tooth Fairy is the same as lying to them, and he will never lie to his kids.

But children are not miniature adults. The brain, body and emotions of a 5-year-old boy are not equivalent to those of a 30-year-old man. Fairy tales and make-believe allow imaginations to soar. They create a sense of wonder and possibility.

These past few weeks have made it difficult for many of us to hold onto any sense of hope, wonder and enchantment. The world can be a harsh, unlovely place. Maybe that’s why we need stories of magic and mystery all the more.

In a darkened theater we can watch a blue fish with memory problems cross the ocean to find her family, or see a little girl have tea with the queen of England and help banish evil giants from the land.

Stories offer us a respite from ugly reality and fan the flames of flagging faith, encouraging us to believe in the unbelievable, at least for a little while.

This weekend I had my first book signing event on a military base. The folks at Fairchild AFB were great to work with and as you can see I had a great location at the Base Exchange entrance.

Santa was also there just a few feet away. 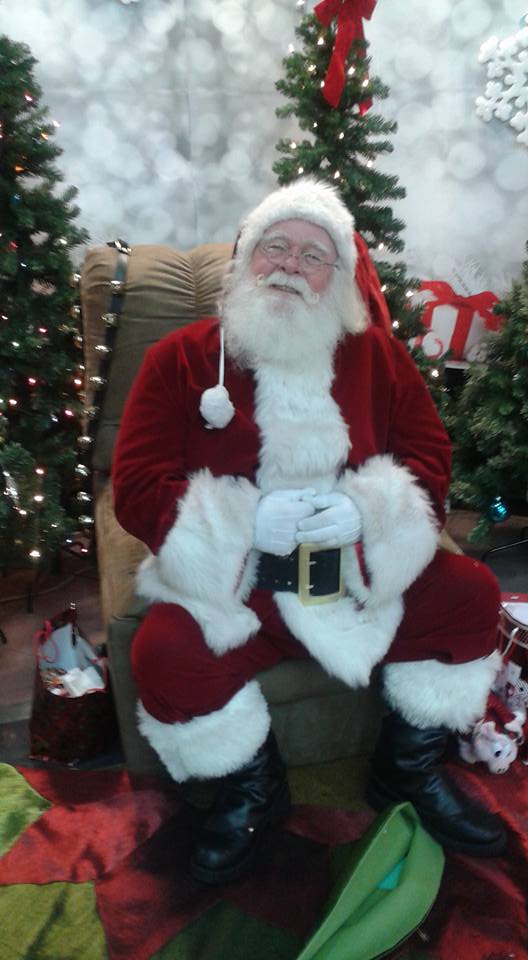 This was the real deal. Turns out authors top his nice list! And Santa tops mine. Another author was doing a signing nearby. He told us that teenage his granddaughter had recently died in a horrible car accident. A scholarship fund had been established in her name. They wanted to have Santa attend the fundraiser, but were told he’d charge $100 per hour.

This Santa took the author’s card and said, “Let me know the day and time of next year’s event and I’ll be there. No charge.”