In which we travel, see beautiful things, drive past enlightenment, do not catch Pokémon, but a lot make memories.

Scenic mountain vistas, mighty locomotives, a dash of dogs and a sprinkling of enlightenment – our recent road trip had it all.

After an enjoyable visit to Olympia a couple of years ago, we decided we wanted to take our youngest to the state Capitol. The torture of an Interstate 5 drive had been lost in the haze of more pleasant memories.

We arrived in time for a late dinner at the hotel restaurant, and our spirits were revived with food, drink and a view that didn’t involve asphalt.

“Look at the lady with the cute dog,” Sam said, as we gazed out the window. “I think it’s a corgi.”

A few minutes later, Derek said, “Hey! There’s a lady with two of them!”

Bemused, we watched a parade of corgis and their owners, taking a slow stroll around the hotel grounds.

“Must be a corgi convention,” I speculated.

In the morning we found out a corgi dog show was being held at the hotel.

With coffees in hand we braved I-5 again for a few miles before heading to Elbe, Washington, for a steam train excursion. Aside from the train at Silverwood, none of us had been aboard a genuine steam-powered train.

On the way, we drove through Yelm and right past Ramtha’s School of Enlightenment. To our surprise, Sam had never heard of JZ Knight. Or Linda Evans. Or New Age anything.

Derek attempted to educate him: “A bunch of people sold their dogs, their cats, their kids and followed this guru chick who claimed to channel a dude named Ramtha.”

“Well, they did,” said Derek, who then attempted to explain Linda Evans and the 1980s. We believe travel should be as educational as possible.

“Boy, all I’ve been doing is making right turns,” he mused. “I hope we’re getting somewhere.”

But get somewhere we did. We enjoyed the 14-mile excursion via First Class passenger car. Brilliant blue skies framed Mount Rainier, and we disembarked at Mineral to tour the Logging Museum, which is set up like a railroad logging camp. We explored the camp and the steam locomotive exhibits before boarding for the return trip.

The next day Sam announced he wanted to see some waterfalls, so we laced up our walking shoes and hiked Tumwater Falls Park. The 15-acre park features a network of trails and footbridges offering expansive views of the tumbling falls.

Of course, the point of our visit was to tour the state Capitol. We knew our politically aware son would appreciate the rich history of the building and sitting in the Senate and House galleries. Our visit concluded with a stop at the gift shop, where we discovered that our state is still firmly in the grip of a two-party system. You can purchase Democrat Merlot and Republican Merlot, but if you’re looking for a Libertarian Pinot Gris, you’re out of luck. You can also get Donald Trump, Hillary Clinton and Bernie Sanders paper dolls, but there was nary a Gary Johnson paper doll to be found.

While Sam enjoyed the Capitol, he was unimpressed with the slogan we read on a sign: “City of Olympia: Working together to make a difference.”

“I feel like it should be, ‘Working together to make a more clichéd tagline,’ ” he said.

The snark is strong with this one.

After dinner at Budd Bay Café we were eager to stroll along the boardwalk with Sam. The lovely views of the marina and harbor were a highlight of our last trip. To our surprise, the boardwalk teemed with people milling about looking at their phones. Couples, singles and families ambled along, heads down, staring at their screens, oblivious to the sunlight reflected on the water, heedless of the lovely displays of public art and tone deaf to the lone street musician who strummed his guitar.

My suspicions were confirmed when I stopped at Harbor House.

“Is this a Pokemon Go stop?” I asked.

“It’s right out there,” he said, pointing toward the harbor. Then he shrugged. “It’s an epidemic.”

We watched as couples ignored the delighted squeals of their toddlers pointing at the boats bobbing in the water, instead intently scanning their phones for a Squirtle in the wild.

Saddened, we escaped the crowds and climbed the lookout tower, which offers stunning views of the harbor crowned by the Capitol dome.

Gazing down I saw a lone family on the beach. None of them had smartphones out. The preteen brother and sister were skipping stones across the water while their parents watched.

I looked for Derek and Sam to show them another family untethered from technology. I found them standing side by side, talking quietly, watching the sun slowly sink into the horizon. Their broad shoulders and height are so alike now, it took my breath away.

Quietly, I sat on a bench behind them and dug my phone out of my purse. I didn’t use it to search for a Pokemon, I used it to snap a photo and capture a memory.

I’d seen a lot of lovely things on our trip, but nothing as beautiful as this. 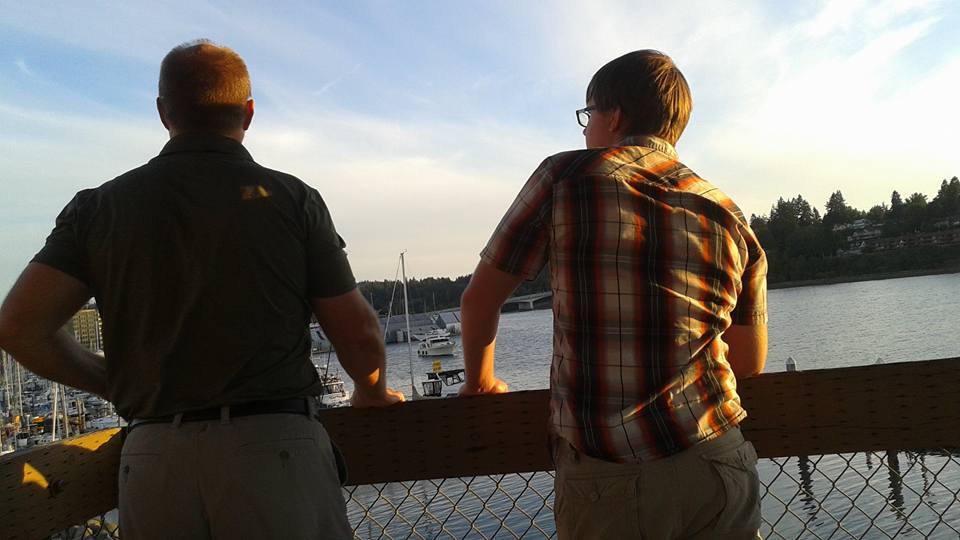