At last night’s “War Bonds” event at Studio 107 in Coeur d’Alene, I learned Nick Gaynos had passed away on April 1.

I can’t be too sad, since he so wanted to be with his beloved Tex who died June 3, 2014.  And I’m beyond delighted that he was able to attend the reading at the Coeur d’Alene Public Libary on March 11 and receive his copy of “War Bonds.” 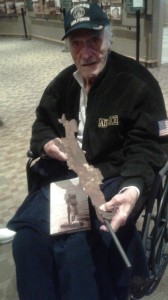 He brought the piece of shrapnel that almost nailed him at Pearl Harbor to the reading. When he turned to the chapter (Damn Yankee) about he and his bride, he lingered over her photos. “Isn’t she pretty?” he asked.

Yes, she is, Nick and I’m so happy you’re together again.

The fading late afternoon sun, blurred by the haze of wildfires, fell softly across the foot of his bed. A smoke-tinged breeze wafted through the open French doors.

His once-commanding frame seemed frail against the stark whiteness of crisp sheets and rumpled pillows. I stood quietly beside him, a writer at a loss for words.

The World War II veteran and Pearl Harbor survivor had endured many things, but the loss of his beloved wife, Tex, was proving too much for his heart to bear. After more than 70 years with her, he doesn’t want to be here without her.

I met Nick and Tex in 2010 when I shared their Love Story with newspaper readers. His regal military bearing and her gorgeous red hair and sense of style made them one of the most elegant couples I’ve interviewed.

They laughed and bantered throughout the afternoon, recalling how they met in the Bamboo Room of the Hotel Californian in Fresno. Nick spotted Tex through some bamboo fronds and was immediately smitten. He told his friend, “See that redhead? I’m going to marry her!” His buddy replied, “No way!” Gaynos said, “I’ll bet ya $10.”

Six weeks later he collected that $10 as he walked down the aisle to marry Tex.

His smile faded when he recalled the horror of the attack on Pearl Harbor. The young private was in charge of air/ground communications at Hickam Air Field on Dec. 7, 1941.

He was asleep in his bunk when the earsplitting scream of airplane engines and the rat-a-tat sound of bullets strafing the barracks woke him. Grabbing his pants, he scrambled out the door.

As he ran down the beach back toward his duty station, a Japanese Zero strafed the sand around him. He hit the ground and covered his head. Gaynos said he felt a hot breeze and heard a whistling sound inches from his ears. He looked up and saw the face of the pilot as he flew alongside him. The pilot grinned.

When Gaynos got up he discovered a large piece of shrapnel next to him. “I grabbed it,” he said. “It was still hot from the explosion.”

After Pearl Harbor he was sent to Officer Candidate School and quickly moved up through the ranks. He married Tex in 1943 and enjoyed a long military career followed by a successful second career in real estate.

On a recent day, I came to tell him that their story will be included in a book I’m working on and to collect photos for the project. His daughter warned me that his health was fading and he wasn’t expected to live much longer.

His caregiver greeted me at the door and Gaynos opened his eyes briefly when I entered the room, then he sighed and turned away.

I sorted through the photos, selecting the ones I needed, and when his caregiver went to photocopy them, I approached his bed.

His eyes fluttered and he slowly raised his hand. I took it and he wrapped his fingers around mine. His eyes fell shut, but his grip on my hand was firm.

I told how I admired Tex, and how much I appreciated that after talking about the awfulness of war, we were able to laugh together at the silly jokes and stories they shared.

“I’ve never forgotten that you told me that a sense of humor is vital to a marriage,” I said. “Thank you, Nick. Thank you for serving your country, for loving your wife, for sharing your memories with me.”

He sighed and released my fingers.

I heard his caregiver returning to the room, so I bent down and kissed his brow – taking a liberty I’m sure Tex wouldn’t mind.

According to recent statistics, World War II veterans are dying at a rate of 555 a day. Time is running out to tell their stories. But in this case, not only did I get to share this hero’s story, I also got to say goodbye.

As I drove away, my eyes blurred and the tears that had threatened all afternoon fell.

The tears weren’t of grief, but of gratitude.

This column originally appeared July 31, 2014 in the Spokesman-Review.